During my ex-gay days, I remember thinking that Christians who identified as gay couldn't possibly be "real" Christians--or if they were, they were living in a lot of sin and trying to justify their life so that they could have their cake and eat it, too. It seemed easier to think that these people were "justifying sin" and were sacrificing a real relationship with God than to really see their heart and their journey.

Recently two of my favorite bloggers have been writing about their journeys and how they came to reconcile their sexual orientations with their faith.

Eric at Two World Collision has written four posts about his worlds colliding.

How did I get to this point? How is it possible that I can live, with good conscience, both a Christian and gay life? Now that I'm here, where do I go now?

For answers to these questions, check out Sankofa Part 1, Part 2, Part 3, and Part 4. I actually got a chance to meet Eric and spend some time with him on my recent trip to Orlando, and he is as genuine as it gets.

Then there's Eugene. I've also gotten a chance to get to know Eugene and he's someone I greatly admire. He writes,

It's been less than two years since I walked through the doors of a local ministry. At that point in time I was stuck - I was confused, lonely, hurting and more than a little disillusioned that I'd failed to achieve "change" despite the programs I'd gone through and all the "right" things that I had done toward that end, and I had no idea what to do next.

Read the rest of his story here and here.

I hope you'll take the time to read their stories. While my faith journey doesn't look exactly like theirs, I can relate to most of what they wrote, and I'm so glad to see people coming through this process with their faith not only intact, but strengthened.
Posted by Christine Bakke at 10:30 AM 4 comments:

I got this e-mail from a dear friend of mine who happens to reside on a seminary campus:

I clicked on your Rising Up blog page the other day, and the seminary sign came up that it had been BANNED!

So I wrote to the help desk, as instructed when one wants to protest a banning. (said something like, sure, she's really bad, and gay at that...but she's my friend and I want to read her stuff--not my actual words) Today I happened to think to try again, and your page came up. So you see, some pagans do get past the screening! And someone in IT is listening.

I'm pleased to know that once again my "really bad, and gay at that" words will be available for seminary students to peruse. Mostly I'm just pleased to have friends who love me no matter how we agree or disagree.
Posted by Christine Bakke at 9:56 AM 6 comments:

I usually can't stand most church reader boards I come across. They seem to fall into one of the following categories:

Garden-variety guilt - "Give God what's right -- not what's left. "
Hellfire guilt - "Read the Bible -- It will scare the hell out of you."
Understood by Christians only - "Heavenly Forecast - Reign Forever."
Hellfire Guilt and Understood by Christians only combined! - "Partake of the bread of life, or you'll be toast!!"
Look at me; I'm witty - "The only Ghost here is Holy!"
Guilt and Witticsm combined! - "Suffering from truth decay? Brush up on your Bible."
Fun Scriptures - "Abstain from all appearance of evil. I Thess 5:22"

Tonight I passed by one that was actually worth the electricity required to light the sign. 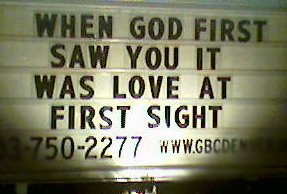 I'm glad to see at least one church use their reader board as a way of communicating a positive message about God's love.
Posted by Christine Bakke at 10:44 PM 7 comments: