More thoughts on Bridging the Gap

Since my last blog post about bridging the gap, I've been thinking a lot about bridging and what's all involved with that. After some offline conversations with folks, as well as comments on that post, I felt I needed to write a little bit more of my thoughts, disjointed as they may be. I'll preface this by saying I don't mean this as some sort of post slamming Christians or Christianity, I just wish to post some thoughts and observations I've had recently. So now...my mostly uncensored thoughts: 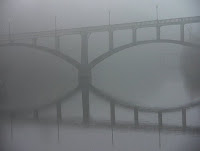 Sometimes I wonder if it's possible to bridge with many conservative Christians. I mean, if a Christian says to me that they don't think gay people will be allowed into heaven, how is it possible to build a bridge or meet in the middle there? I don't believe that being gay (in orientation and behavior) means someone won't go to heaven (if it even exists in the form most folks think). How do we get to a middle ground there? Likewise, I believe I'm whole and wonderful just how I am. Others believe I need to be healed. What is the middle ground?

A bridge, to me, implies meeting in the middle. So what's the middle here? Gay people can get halfway to heaven? I'm only partially flawed? That is an untenable position to me. I spent too many years believing I was broken and flawed and "less than" merely because I had same sex attractions. And now I know that I'm not broken and I feel more complete and whole than I have ever felt in my life, and you can't convince me otherwise. Likewise, many Christians feel you can't convince them that they Bible as it is translated could be wrong here and there.

This leads me to my next thought. Is a conservative Christian building a bridge merely so the "other side" can cross over to their side? For many pro-gay people who were doing bridging work with conservative Christians (many of them ex-gay) years ago on a site called Bridges Across the Divide they became disillusioned with the bridging work over time because there was no middle ground that anyone was willing to stand on. Conservatives were not going to concede that gay relationships were OK, and self-accepting and -respecting gay folks were not going to concede that their lives and relationships were not okay. At an impasse, and after many hurtful actions and statements by conservative Christians who used to be "bridgers", many pro-gay people are no longer interested in bridging work. And I don't blame them.

The inherent problem with trying to bridge over gay issues is that you're talking about our lives. And more and more, many of us are feeling like our lives are not up for debate. The time for debate and dialogue about whether my life, and my basic orientation is OK, is over. As Mel White, founder of Soulforce, wrote on his blog:

"For me, the debate is over. The verdict is in. Homosexuality is not a sickness, not a sin. Furthermore I have no interest in continuing that debate. Whether fundamentalist Christians believe it or not, I can say without fear or ambivalence: “I am gay. I am proud. And God loves me without reservation!”

I’m no longer willing to debate my friends on the religious right. I’ve sat through a thousand dialogues. I’ve stood in protest, been arrested and thrown in jail. I’ve written. I’ve preached. I’ve been interviewed endlessly, all hoping that one day fundamentalist Christians would realize the tragic consequences of the untruth they proclaim.

Now when someone interrupts a speech or sermon to ask me “Have you ever read Leviticus 20” my answer is simple if abrupt. “Friend, you’ve confused me with someone who cares what you think about Leviticus 20.”

This brings me to my next thought:

In his speech in Cairo talking about the U.S. and Islam and moving forward with our relationship with Muslim countries, President Obama said:

"But I am convinced that in order to move forward, we must say openly to each other the things we hold in our hearts and that too often are said only behind closed doors. There must be a sustained effort to listen to each other; to learn from each other; to respect one another; and to seek common ground. As the Holy Koran tells us, "Be conscious of God and speak always the truth."

Maybe some of the problems that arise from bridging are that many times in order to bridge, we don't speak all of our truth. We're trying not to offend, we're trying to withhold judgment, and we're trying to make a lot of allowances. For instance, I feel like many Christians make friends or sustain friendships with nonbelievers to win them to Christ. They often don't show their hand, but keep it close to their vest, not wanting to reveal what all is in their cards for the future of the relationship. (On the other hand, maybe in order to keep bridging without offending the other person or driving them away, we need to keep some of our true beliefs and intentions hidden?)

I know about keeping things hidden because I was raised as a fundamentalist, evangelical Christian and I almost never made friends without first ascertaining if the other person were Christian. If they were, great. If not, my goal was to win them to the Lord by (nearly) whatever means possible. It made me perhaps a wonderful friend on the outside, because I was willing to do almost anything to spread the love of Jesus. But inside I was always somehow pathologizing everything they did, and saw them as inherently lacking in something (namely, God) and having needs that could only be fulfilled by Jesus. I saw everything in spiritual terms and would rejoice when I felt like they were having trials that were bringing them closer to God, or if I felt like God was blessing them in some way to show his love and grace. I would pray for my friends because they were incomplete without God.

Because of this, I don't honestly know how to bridge well with Christians, because I usually feel from them a certain sense of superiority, whether intended or not. If someone thinks they have the ticket to the only truth, where does that leave me? How can a Christian just be a friend without an agenda, when they have the great commission to fulfill? How can they "bridge" when bridging might require leaving that commission to witness behind them for a bit?

Once again, more questions than answers. But I'm interested in others' thoughts on this. What do you think? For my readers who are not Christian, how do you feel in your relationships with conservative, evangelical Christians? What do you think can be done to bridge with them? Do you agree with things I've said? Not? For my Christian readers, what do you think? How do you feel about bridging with those who don't share your faith? Do you think there is a middle ground somewhere, or is that also untenable to you? Thank you in advance for your thoughts.