One of the only things I know for sure

I got another e-mail yesterday.

I get these every so often. E-mails from old friends that I used to go to church with. Friends of the family who see my e-mail address on someone's group e-mails. People who know I moved to Denver to do the ex-gay thing but lost touch several years ago.

What do I say?

A while back, I was driving down the road and happened to see an old friend, Tim, out working in his backyard.

Tim and his family were more than just friends to me. This was a family that in many ways adopted me when I was making the transition from gay to ex-gay and then, hopefully, to straight. They prayed many hours for me. They held me while I cried. They took me into their home on many occasions when I needed a place to just be. I spent holidays with them.

Oddly enough, we'd met at the first church I'd attended here in Colorado. Then I left and started at another one, two doors from their front door. After they were asked to leave our former church, they ended up at my church. I subsequently moved on to another church (although not because I was trying to get rid of them, which we always joked about). Our relationship survived all these church moves and upheaval, including a period of time where I was still friends with the pastors of the former church and each family was so hurt by the other that I couldn't mention the others' names.

Our relationship didn't survive me no longer being an ex-gay or no longer going to church or identifying as a Christian, though.

Not that they shunned me. I saw them about a year or so after I'd told them that I was finally for sure done with the ex-gay thing. I saw them at the funeral of Tim's sister and they were so happy to see me, and comforted, I think, by the fact that I'd come. I knew they cared about me deeply.

And I knew then, a year ago, and I know now that they still care about me. But it's with a broken heart. It's with a burden for my salvation. It's with a sense that I've failed, or perhaps they've failed me.

So when I drove down the road and caught Tim out of the corner of my eye, I flipped a U-turn, and stopped at the house. We spent about an hour sitting in the shade of the backyard, just catching each other up on our lives. I was matter-of-fact about mine. I'd just come from being on a panel at a community college on human sexuality, and I talked about that a bit. I talked about my blog. I talked about my cats.

It was nice, just catching up and hearing what the whole family had been up to. I got to see their daughter who was like a younger sister to me. (I used to say that she thought the sun rose and set in my backyard. And for a few years for her, I think it did. And I liked that.) It turns out she is going to intern at Ted Haggard's former church after graduation (this was before the Ted Haggard debacle, although I suppose that hasn't changed her plans). I wasn't entirely sure what to say about that, but encouraged her in her future plans all the same.

As I was leaving, I said to Tim, "It's hard when everyone thinks I'm a failure. That I've failed."

He nodded his head, I think, and gave me a hug. But he didn't deny that people (our formerly mutual friends and church family) think I'm a failure. He is not one to lie, and I appreciate that about him.

So, back to the e-mail of yesterday. These are friends of the family. Missionaries. YWAM folks. People who had reached out to me during a very troubled time in my early 20s, and again when I was making the move to Denver to be ex-gay. I wrote them, "I can't remember when the last time was that we corresponded - I suspect a long time ago. I probably still identified as ex-gay then. I can't remember. Anyway, I don't anymore. I'm gay, end of story. Never changed; can't imagine I ever will. Just thought I'd put that out there since so many people wonder and are not sure how to broach the topic."

I want people to know about my life, and I certainly want to be honest and out, and I know they want to ask (and I don't want to go several e-mails with them fishing for the information). I would rather be hated for who I am than loved for who I am not. The problem though with this crowd, is not so much being hated, but of them being so saddened over my life, and so filled with grief about where I am now in my journey.

But I don't feel like being a project or participating in this game where I can never be on a level playing field with them. I don't want everyone to learn their life lessons about "Loving the Homosexual" with me. I did enough of that when I was ex-gay and constantly having to teach people in churches what that meant, and didn't, and how they could help me (or more to the point, how what they were doing was in fact not helping, but hurting).

I'm done. And yet, these are people I care (cared?) about. And I know in most cases the feeling is mutual. And I am not sure how to have relationships with these folks and have it be anything mutually fulfilling. Are there many evangelical/fundamentalist Christians out there that even know how to have a relationship with a former Christian without feeling superior or like there is a soul in need of rescuing? I know two or three but that about it, and it is so hard to always hope.

Anyway, at this point, all I really know for sure is that I'm not a failure.

And I'll put off checking my e-mail again until tomorrow.
Posted by Christine Bakke at 7:29 PM 10 comments:

The Truth about Exodus and Youth

Yesterday Peterson posted about Exodus and their affiliated ministres that work with youth. He writes:

On June 26, 2006 I initially left voice messages for Alan Chambers of Exodus International and another national ex-gay leader about inappropriate incidents that affected youth at an Exodus member ministry. I will not go into the details at this time, but I shared three specific situations that happened within the previous year. The shocking details of the third situation compelled me to contact Alan and this other national leader. In my initial messages I said that I would rather discuss this privately, but if they did not wish to talk, then I would initiate a public discussion.

He detailed how he's been in conversation with Alan Chambers of Exodus about putting into place ministry guidelines that protect youth. While Alan originally seemed to be on board with policy changes and new requirements, he did not make good on his word to Peterson. Peterson continues:

Alan said that the new requirements for Exodus member ministries will go into effect in at the beginning of 2007 and will be done in a public way. I pressed Alan to consider putting them into effect sooner, but he said that he had to meet with the board about it all first.
[snip]
I since followed up with Alan and his assistant through an e-mail containing the draft of this blog entry. I have gotten no further response and as far as I know, and I have seen no evidence of new guidelines being published.


Peterson has followed up with some clarification about the incidents that took place, as well as his Quaker views and how they inform his handling of this entire situation and his dialog with Exodus. He ends with this:

Alan has the power to keep young people from being harmed under his watch. He shared that he will bring forth new guidelines that will protect youth. I believe these should minimally include:

1. Complete separation of youth and adult participants at all Exodus member programs and Exodus sponsored events.
2. Full background checks for all staff working with youth.
3. No youth should be enrolled in a program against his or her will.

If nothing else it this just good business and lowers their liability, but much more importantly it shows a genuine love and respect for these young people.

Indeed. Exodus constantly claims that it acts out of love, and that it believes in self-determination (I guess unless you're under 18 or are being pressured by your parents because you're an adult but they hold the purse strings).

There has since appeared a post on Ex-gay Watch entitled "Who is Telling the Truth about Misconduct in the Exodus Programs?". My money would be on Peterson. Who has the history of truth-telling and who has the history of obfuscation and deliberate mistruths?
Posted by Christine Bakke at 5:36 PM 3 comments:

Realized I should blog a couple of pics from the great blizzard of ought six in Colorado. Where I lived we got two feet in less than 24 hours, the 7th biggest blizzard in Colorado.

This is from my upstairs window...I kept watching my truck getting more buried by the hour. 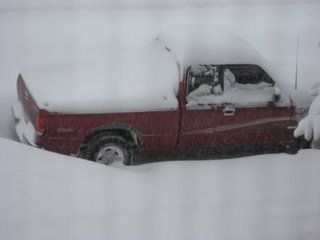 Snow accumulating in the backyard. I can't get out this way because the gate opens out and has tons of snow on the other side. 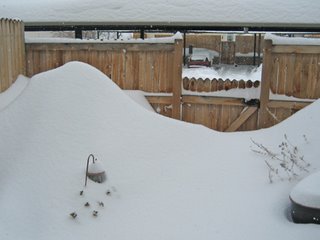 The blizzard started on Wednesday. This is me on Thursday afternoon trying to figure out how to get out of the house to shovel. I think my hat was falling off - I am not sure my head is that tall and pointy. Fortunately, I've never replaced the screen in the front screen door. 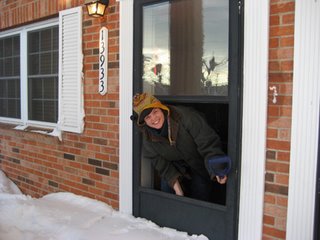 Not everyone in Denver was so lucky as to have their very own SUV island on their street. There were abandoned cars all over the city, and many on my street. This one was abandoned right in the middle of the road, and the owners didn't come get it (or maybe the city moved it) until Saturday night. So the plows just went around it and so did all the drivers. 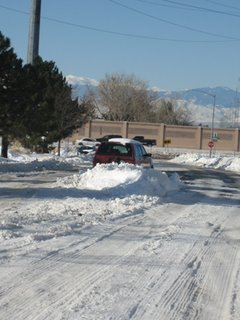 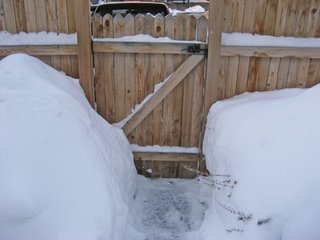 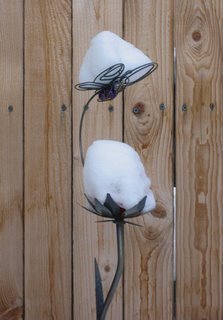