These last few weeks have been filled with pain and sorrow for many in the LGBT communities following a recent spate of teen suicides resulting from gay kids being relentlessly bullied (or kids that were just perceived to be gay). I wasn't sure what to write about it; it felt so overwhelming. And it's just a drop in the bucket of all the lesbian/gay/trans/bi/queer youth who have attempted or completed a suicide.

I'd just written my post about Focus on the Family's campaign against anti-bullying measures in schools and then all this came to light. So it felt particularly painful and heavy to me.

I was mulling this over when I read with great interest a blog post from Exodus Vice President Randy Thomas, where he tells his followers that they should "Step Up and Speak Out" against bullying.

Randy writes this particularly touching paragraph: "We must come to the aid and defend life no matter where it is being exploited and dehumanized. We must speak out against bullying behavior. We must intentionally edify, bless and build up others to counteract the hurtful influences of this world."

It sounds beautiful, but unless it represents a true shift for Exodus, it is just PR. Sadly, the words mean nothing until I see a change in the continuing rhetoric.

These words are coming from the mind of someone who actively has worked to make it more difficult for LGBT people to live lives free from dehumanization, harassment, and yes, bullying. This comes from someone who oversees, according to the Exodus website, more than 170 "professional mental health and church-based member agencies across North America." Over at Beyond Ex-Gay, we have consistently heard from people who have had contact with many of these ministries that they have been harmed. There have been people who have consistently complained of dehumanization and abuses at several ministries and the claims have not been investigated, and the participants have not been listened to.

Alan Chambers, the President of Exodus, has on more than one occasion called gay love a "counterfeit" and also said the gay community is a "counterfeit" community and that being gay is an addiction and bondage. Alan and Randy both oppose hate crime legislation (which includes crimes against LGBT people based on orientation/gender identity). They regularly share their testimonies in an effort to influence legislation pertaining to LGBT issues. They talk about change in ambiguous language meant to mislead, and disregard the stories of those who nearly killed themselves trying to change their orientation, and who now live truthful, whole and authentic lives.

It causes me to recall a conversation I had with an ex-gay leader who asserted his wish that we would go back to time when gay people felt ashamed of being gay. When your wish is for people to feel shame about their lives, when you want them to live in fear and silence, that is dehumanization. When you want to roll the clock back and go back to a time when people suffered deeply and lived lives of desperation, humiliation and shame, you are being a bully.

Randy continues, "People, regardless of who they are or what they believe, need friends who bless and defend not expose and betray. We have to fight selfishness and exploitation with selflessness, respect and unconditional love. We must default to having a humble and high regard toward another person’s soul." 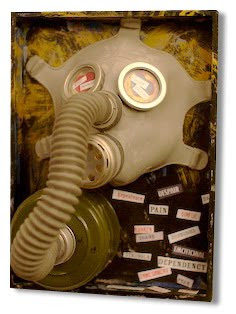 It might not be the words "fag" or "dyke" or "queer" but it's the words "broken" and "emotionally dependent" and "bound up in sin" and "deadly lifestyle" and "bondage and addiction" and "counterfeit." It might not be an actual blow but it's a systematic tearing down of the worth of lesbian, transgender, bisexual and gay people. In short, it's bullying behavior. And don't tell me that it doesn't trickle down to our vulnerable youth with some very tragic consequences.

The artwork above is a piece of mine titled "Self Preservation." There are days that I feel the need for a way to insulate myself against the bullying words and actions of those around me. Most days I am strong enough to exist without that extra insulation, but there are some days....
Posted by Christine Bakke at 10:36 PM 8 comments: