I'll be back to some serious blogging soon, for those of you into that sort of thing. Not that there's anything wrong with that. Some of my best friends are into serious blogging.
Posted by Christine Bakke at 9:53 PM 1 comment:

Yes, yes I did, for a while there, my senior year in high school. Sometimes. It's hard to dress like a bimbo in a Jack in the Box uniform.

This tidbit about me comes from the French version of Glamour magazine - their September issue. It was re-written in first person, so I talked to them for a while on the phone, reviewed a draft (had a friend translate it roughly from the French) and that was that. "I dressed like a bimbo." Not exactly how I would have put it, but never mind. Take note: I would love that on my grave stone.

Anyway, I'm alive. Yes, I am. I know it's been 85,000 years since I've updated my blog, or responded to e-mails. I've been exhausted, and just trying to recuperate and put my life back together after the last few months (6 months, I guess) of craziness. I needed to get back working again, as it turns out that activism doesn't pay. Who knew?

So I've been trying to have a regular life again, and I'm picking up any work I can take. It looks like I'm giving up some of my wild, freelancing ways though, because I took a job three days a week at an agency. But that's boring stuff. You don't want to read about my work.

I did go on a spectacular camping trip a few weeks back. My friends rented some kayaks and took me along with them to a little island off of a lake in Wyoming. Oddly enough, it's actually the first time I've been to Wyoming since I moved here in 98. It's only about two hours up the road. 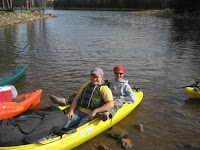 I've never camped at a place where I had to ferry my gear over in a kayak. Tons of fun, wonderful weather, good conversation and friends. I also got to do something I've always wanted to do, but never felt safe enough doing. I camped by myself.

My friends had to leave on Sunday, and I didn't have to leave until Monday. So they left me and my kayak on the little island. I figured I would hear anyone coming, and really, who would want to? It was kind of in the middle of nowhere (in fact, the nearest town was 20 minutes away, with a population of 15). And not so easy to get to. 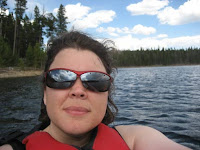 It was an amazing experience. The quiet. The moon. At one point, I was out kayaking when the moon was coming up in the sky. A beaver decided he needed to check me out, and kept swimming around my kayak, at times being only about four feet away, until I would do something crazy and threatening, like breathe, and he would slap his tail, go underwater and appear again in a totally different location. We played hide and seek for a while, with the moon rising on a piece of lake and land inhabited by no human but me.

Thanks to everyone who has e-mailed me, or commented on my last blog entry. I promise not to be gone so long in the future. I'll be back again soon.
Posted by Christine Bakke at 8:59 PM 7 comments: