News from this "Bakke" girl

On Saturday, November 15th, transgender, bisexual, lesbian and gay people in every major city in the United States held a protest against the passage of Prop 8 and similar constitutional amendments. Our message was simple: everyone should be allowed the right to marry. Peterson and I happened to be in Colorado Springs that Saturday morning, so we participated there.

Peterson spoke forcefully and eloquently at the rally (they had an open mic), stating that we already have the right to marry whomever we choose, and it's insulting that we have to ask permission. He also said that we are being treated shamefully, but ended with a quote from Langston Hughes' poem, I, Too,

"Besides,
They'll see how beautiful I am
And be ashamed--"

And the crowd cheered as we saw how beautiful we were.

The following photos are courtesy of Gina Richards. 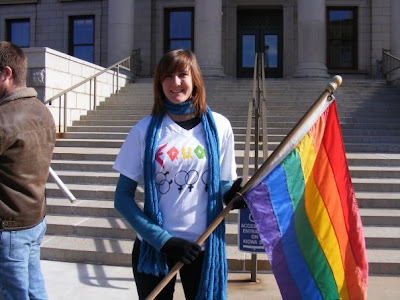 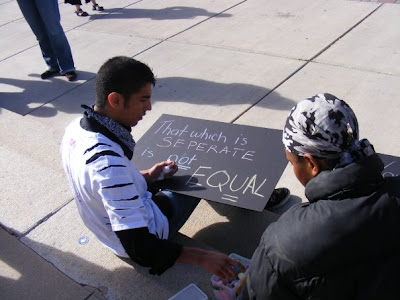 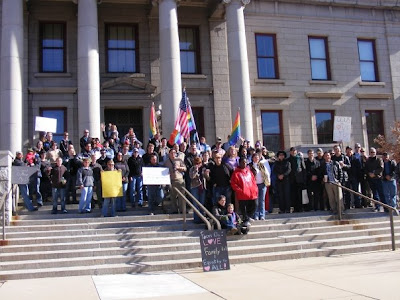 In other news, Dan Gonzales and I were quoted in an interview by the Denver Daily News. I particularly enjoyed the comment below the article where I'm referred to as 'this "Bakke" girl.'

On Tuesday, I'll be giving a talk at the Women's Circle at the local GLBT center. The first time I ever told my story was at this group, three years ago, so I'm coming back now to tell it again, but more importantly, to talk about the Ex-Gay Survivor movement that has been launched in the last few years. If you're in Denver and want to attend, email me for more information.

I'll close with another quote by Langston Hughes (who was also gay):

Posted by Christine Bakke at 8:44 PM