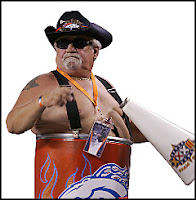 Instead, I give you the ultimate Denver Bronco's fan; a superfan, the "Barrel Man." Rumors are that the suspenders are the only clothing item he used to wear (he just retired), but I can neither confirm nor deny this. Another casualty of that decadent "straight lifestyle."

So, in other news...ummmm....I was a guest on....um...Candace Chellew's Whosoever Godcast where, upon listening just now, I realize I say the word "um" about mmm, 50 times (it's still weird for me to hear my voice, so I get really self-critical...um...don't mind me).

It was a lot of fun chatting with Candace, the founder of whosoever.org, the first online magazine for LGBT Christians. She started this ten years ago when there were hardly any resources online for Christians who were lesbian, gay, bisexual or transgender (too bad I didn't pay attention to it before I moved out to Denver to start my ex-gay life, huh). She did a lot of ground-breaking work during a time where it was not OK to identify as Christian and gay, in almost any circle (thanks Candace!).

We talk about the conference, who it's for, what it'll be like; and a bit about my story. Toward the end, she shares some thoughts on tolerance, the ex-gay movement and Christians. Definitely worth a listen. Just promise you won't hold all those "ums" against me.

In other news, I got an e-mail from Kevin Moss that my story somehow made it onto a gay Russian site. Kevin is a professor of Russian studies (and gay studies and gay Russian studies) at Middlebury college in Vermont. Here's the translation:

35 year-old American Kristina Beykk wanted to escape from homosexuality with the aid of the program of the so-called ex-gays, who promise to cure the "misguided souls" through the word of the Lord, the lesbian journal "Pinx" reports.

After Beykk realized that all this is nonsense and charlatanism, she became one of the first women in the United States to openly challenge "Reparative therapy", which affirms that sexual orientation can be changed.

When she was 27, Christina decided to "put an end to vice" and to go to church.

There a preacher laid his hand on her head and began to fervently pray that "the demon of homosexuality leave this woman."

For five years Beykk desperately tried to "be cured", sincerely believing that salvation is just around the corner.

"The only person I fooled all of this time was myself," she says today.

That is why Christine has decided to tell her story to other doubters to convince them: You can be happy only if you are true to your own nature.

It's actually kind of amazing that Kevin was able to link me to the story, since my last name was spelled phonetically (although erroneously, as my last name rhymes with hockey) and I think they were trying to cover all the bases in the spelling of my first name. Thanks, Kevin! 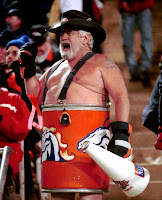 That's about all I've got for right now. Well, no, that's not actually true. I have so many things to blog about, just not enough time for now. I'm doing a lot of work for our upcoming Ex-Gay Survivor Conference (it's not too late to register!) and so I'm having a hard time keeping up in blogland. I'll try to do better. If only so you don't have to see a picture of the Naked Cowboy at the top of my blog...