I'm listening to Peterson on Radio Catskill and he's talking about, wow, I don't know what anymore (he's moved on and I'm still listening and my attention span is short) but he said something like..."the ex-gay movement is all about these theories that are basically refried Freud..." and I thought yup, ain't that the truth. 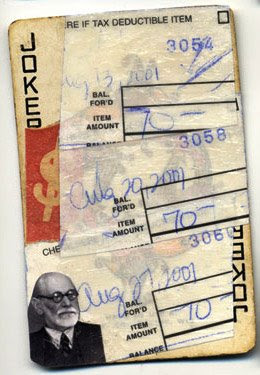 My previous post dealt with the way that the ex-gay movement doesn't see or understand that they are not seeing a real representation of all folks queer. Jeff's video and the therapist's immediate inquiries into his family made me think about the therapy I had, and the therapy I knew that other folks went through.

The fishing expeditions (a friend started to believe he didn't feel his father's love after being badgered with, "did your father say he loved you? It doesn't matter if you knew; did he say it? He didn't say it? Then you didn't really know it, did you? Of course you didn't know it; didn't feel it. How can a child know it if they're not explicitly told it?" and so on) and leading questions and suggestions (one pastor's wife suggested I make up abusive things that might have happened to me, so that I could break the curse of satan, just in case I didn't remember specific things that might have happened to me in my life. I forcefully refused.) I was even told that sometimes women can be gay because they have not been able to grow out of the stage of penis envy.

I knew one women whose therapist gave her assignments to flirt with men. An ex-gay guy who went on several dates to try to learn how to be with a woman (without disclosing that he identified as ex-gay), on the recommendation of his therapist. A woman who was counseled by the leader of the ex-gay group that women should wear makeup ("need to put some paint on the side of the barn"). A man who changed his last name because his ex-gay therapy led him to believe that his parents were to blame for him being gay. A woman who insinuated that she had been abused because she felt like her story didn't "fit" the ex-gay model without some kind of a root cause. A young man who said that after he got out of the ex-gay movement and was finished with reparative therapy, that's when the real repairing began. He had to repair the relationships with his family after buying into the belief that they were distant from him and made him gay.

I myself sought out about everything that was available in the therapy realm, spending thousands of hours and dollars grasping for any kind of healing available. I began with therapy with a licensed therapist (one of the worst experiences I ever had in therapy) who did theophostics with me (a special kind of Christian therapy: guided visualization with Jesus) and she eventually came to believe that I was so oppressed by Satan that seeing me oppressed her as well and she had to have friends pray for her and do deliverance work with her after seeing me (what a self-esteem booster there!). I had group counseling and prayer through Living Waters, and we spent time going back through several generations to identify generational sins that might be influencing my life today. I renounced and declared victory over all sorts of sins from previous generations (talk about a fishing expedition - boy howdy).

I spent hours having deliverance work done, and I still can't talk a whole lot about it to this day, some of it was so confusing, upsetting and at times, traumatic. I was counseled by at least four different pastors and wives over the years. I was also prayed for and discipled by numerous people in various churches, to whom I confessed so much and let them into so many areas of my life (which also unfortunately meant that they could do greater harm to me emotionally and mentally). I attended conferences and had so much healing prayer that if anyone should have been healed, one would think I would have at least been a good candidate.

That's not to say that some of us don't get help from our therapy. I know that even in spite of all of the horrible therapeutic experiences I had, some good came out of it. However, I believe I could have gotten the good through other means without going through the trauma of all of these experiences and the years as ex-gay and seeing everything through the ex-gay crazy psychological lenses. At any rate, I am now actively recovering from these years, and the bad therapy and damaging and sometimes completely backwards Freudian ideas (oh, and by the way, I'm quite happy being a woman).

I do need to say that all of these people meant nothing but good for me. They gave so many hours of their lives to me, listening and talking (mostly listening) and praying. So much praying for me. I can't fault their intentions. But they just are not equipped. And one day sessions like Love Won Out, and outdated theories do not equip people to deal with ex-gay folks. In many cases I fear that it just gives them enough information so that they have a sense of false confidence about being able to handle these issues, and they know just enough to be dangerous. 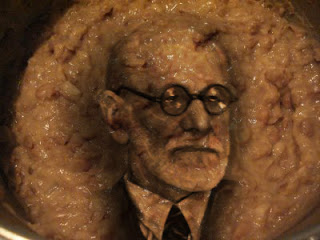 Of course, like in my case, even licensed therapists who have an ex-gay mindset and agenda can be just as damaging as the lay leaders. Sometimes I can't decide which is worse. Counseling by a therapist we think should know the best because we think they're the experts and we trust them more, or lay leaders who we think love us more because we are not paying them. No matter what, ex-gay counseling done by therapists or lay leaders, many poorly equipped through books, Exodus conferences, Living Waters training programs (one week long), Love Won Out day-long conferences, on-the-job training, or for some, nothing more than being ex-gay themselves, mixed with refried Freud, is a recipe for disaster.
Posted by Christine Bakke at 9:53 PM