Jed took me to Sarah Lawrence college to watch Peterson's Doin' Time in the Homo No Mo Halfway House play. During the Q&A, I had the opportunity to come on-stage with Peterson and say a few words about being a woman in the ex-gay movement. Peterson mentioned it on his blog, and thankfully rephrased what I'd actually said so that it made sense. 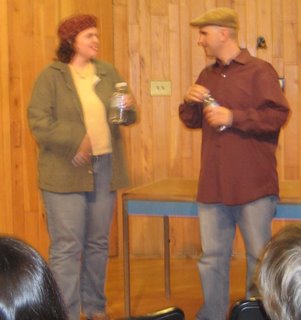 Here's a very blurry picture of us. Peterson suggested we think of it as art. Hmmm, I think I recall that it's his water that I have in my hand and took a drink from. Well, he's a sharing kind of guy.

Here are three images of Peterson using every electronic device he carries with him, all in the space of about a half-hour. I think it's clear he was wishing I would stop using the crazy flash on him. Oh, and don't worry. He didn't eat any of that pizza. He's still a good vegan boy. 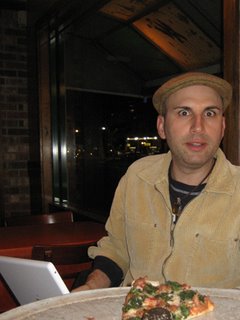 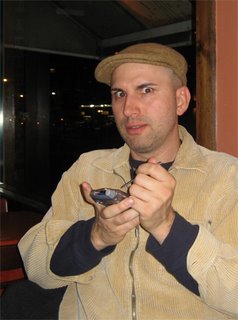 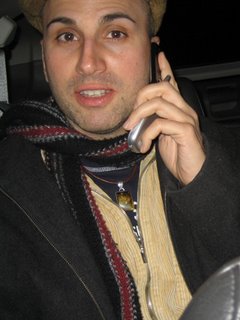 Peterson arranged for me to stay at the house of a Friend (that's capitol "F" kind of friend...a friend who also is a Quaker Friend). I was very thankful to have a place to stay. 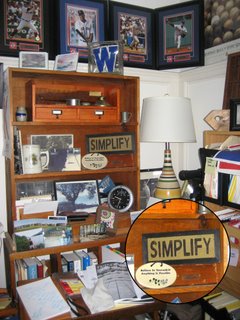 This guy's house had enough stuff in it to fill about three houses. I did have to laugh when I saw his "simplify" sign, though. I've highlighted the little sign in front of the "simplify." It says, "Believe in yourself and anything is possible." I guess we all have to start somewhere. 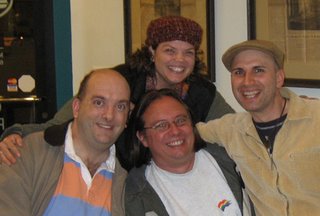 I also got to spend an evening with Mike A. and also with Steve Boese from A Tenable Belief. It was wonderful to spend time with them both, and in addition, I was able to spend quite a bit more time getting to know Steve, and that was fantastic. 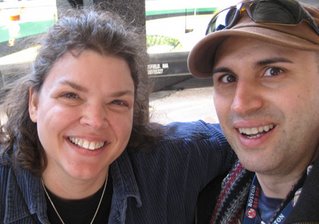 Here's another of Peterson and myself just before I boarded the bus back to NYC.

(Some other pictures from my trip are in the previous post below this.)
Posted by Christine Bakke at 7:15 PM