Note: the title is playing off of Alan Chamber's book "God's Grace and the Homosexual Next Door."

I'm still a bit tender from all that went on at our conference, and I'm feeling kinda "mama bear"ish about our attendees, our family. I'm tired of people enduring the heaping on of shame around this issue and I feel very protective.

Some of you may know that Alan Chambers has been quite active lately online, and many of his comments have been snarky, dismissive, and attacking.

When Alan Chambers tells Darlene, Jeremy, and Michael (the three former leaders that issued the apology) to "Move on," and calls their apologies "hollow and self-serving" it's hurtful, and it's hard not to feel that, on behalf of the three courageous former leaders, and on behalf of regular former ex-gays who attended the conference. I don't want those who are in a fragile place to feel, yet again, like Exodus doesn't care what happens to them when they leave the programs. And that if they tell their stories, they will be dismissed and put down. I don't think we need any more messages that our stories are not worth listening to.

I saw that Alan just left a comment on Shawn O'Donnell's blog and stated, "Harm? Come on, Shawn. No one is being harmed by Exodus offering people a choice. You KNOW better."

It seems like another one of his word games (like the one about the word "change"). Some of us who are telling our stories are saying that more harm than good came from our ex-gay experiences (most of which involved Exodus-affiliated ministries). The "offer" of a choice (whatever that really means) is different from the actual methodologies, ideas, and practices which Exodus ministries use. All of us telling our stories have detailed specific ideas, beliefs, and actions that caused us harm.

Now, about the "choice" issue. What choice are they offering?

Is it the choice between being kicked out of your church, or being loved as "the struggler?"

Is it the choice between a relationships with parents who believe we can and should pursue change because others claim to have done it, or living a life being true to yourself but without a good relationship with family?

Is it the choice between which state to live in because Exodus has politically backed anti-marriage equality amendments that could negatively affect your children or yourself?

Is it the choice of having to believe that you are broken and inferior, or the choice of finding your own wholeness in a world that is all too ready to believe what they are told about gay people?

In addition to proclaiming that there is a choice, they also testify before lawmakers that gays should not have equal rights under the law because "change is possible."

They have an association of ministries with virtually no oversight, who are all employing different methods for promoting change, some much more harmful than others.

They make vague statements that are cleverly coined to mislead. They are not unaware that when they say "change is possible" that most folks will believe they mean we can choose not to be gay, or that we can change our orientation. If you dig a little deeper (which many don't) we find that they mean a change in behavior, but not necessarily orientation (and only that is being recently acknowledged).

When people think that we can choose our orientation, or we can "overcome" it and be healed (as in, made straight), they are less likely to be tolerant and loving and much more likely to be lacking in both respect and grace. Some even seem to be more likely to resort to violence. In their mind, if you don't like abuse, then you should just change.

They highlight ex-gays with families and children, when the majority of ex-gays seem to remain celibate.

They participated in a Love Won Out event (Seattle) that was scheduled at the same time as a local pride event. Then we are told that they would "never" do anything like that, and find it offensive that we held our conference at the same time and location. 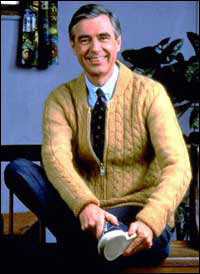 So what does all of this have to do with the title of my post? I am one of Alan Chamber's cyber neighbors. And he certainly seems to lack grace for all of the homosexuals next door to him in in the online world. While he is attempting to be more truthful (witness his recent honesty about most people not actually being ex-gay), it is only just a start.

And if Alan and Exodus really cared about people who have gone through their ministries and left (which they estimate — on what statistics we don't know — is 70% of folks), Alan would not be saying these hurtful things online. He would not tell people to just "move on." He would not call their apologies a game, and mock the significance of this for many people who have experienced harm and damage. He would not try to dismiss the legitimate concerns that many people have, while issuing statements to the press that they are seeking dialogue.

I am trying very hard to find my own grace for Alan Chambers, my neighbor, and I hope he can find it in his heart to live out the title of his book.
Posted by Christine Bakke at 1:10 AM