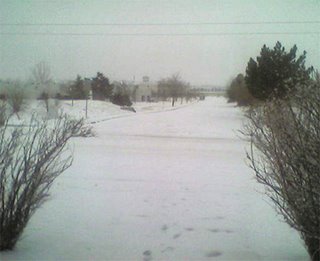 (I took this picture this morning - there's more snow now)

So I'm a bit shaken up, feeling lucky and guilty all at the same time.

To celebrate the first day of Spring, Denver is having a snowstorm. I had to drive my pickup truck (rear-wheel drive, no good traction in spite of 300-400 pounds at the back) to my dental appointment this morning, and on the way back home, I hit a patch of snow or ice and lost control. I fishtailed my way across a median and two lanes of oncoming traffic before landing on the opposite shoulder. Fortunately for me, I didn't hit anyone or anything, and my truck seems OK although I'm sure I'm well out of alignment. My neck and shoulders are a bit sore, too.

Still it's all minor in comparison with the fact that two people that were behind me (or perhaps in the lane next to me, I'm not sure) ended up colliding with each other. They were both out of their cars and exchanging information (fender bender...nothing too serious from the looks of it).

I called my insurance agent (a very nice Christian man) who said that I didn't have any obligation to stay or swap information, as I wasn't involved in the collision, and since it didn't look like there was anything a third party could do. Even if I was the third party that may have indirectly caused the accident.

The whole Denver area is on what's called "accident alert" which means the police don't come for accidents that don't involve injuries. My insurance agent just said that if I could get off of the shoulder (always interesting in a truck that often refuses to move in a forward direction in snow or on ice, and certainly not on anything resembling an uphill slope) I should just get back on the road and go on home.

So I did. But I feel bad. Still, having survived an incident 4-5 years ago (a minor fender-bender with people who lied about who was in the car, how many were in the car, the type of injuries sustained, and sued my insurance company, etc) with the end result being that I paid well over $3,000 a year for insurance for the following three-and-a-half years, I wasn't exactly eager to get myself involved in anything else.

Welcome, Spring! And to the two people in the accident...I'm really sorry. Um...hope you have a nice spring anyway?

(Note: This is the third...or fourth...time I've had a major spinout episode with this truck, including spending hours in a ditch one night. Here's a tip - 4 cylinder rear-wheel drive light pickups are not made for Colorado. They're just not. at. all.)
Posted by Christine Bakke at 12:42 PM