I think it's pretty obvious by some of my recent posts that I am trying to process all the feedback I've gotten with the recent media attention (and the mail Peterson and I receive on bXg). I had a hunch that it would be difficult for me, who has grown up wanting to please, and spent much of my life aching to be understood (although both of these things have greatly improved as I've settled into myself the last few years). So while I'm actually dealing with this much better than I expected and developing a thicker skin in the process, there have been a few hiccups, and so my readers get a glimpse into the journey. 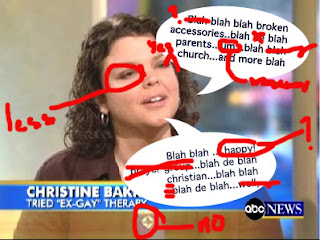 Within the first week of the Good Morning America interview, I had people questioning things I said, or telling me I should have said this or that, or not said this other thing, or if I really meant x instead of y. It was overwhelming (especially since it was my first time on TV, and I was unprepared for two of the questions, both things I said I hadn't wanted to talk about just yet). Some of it was actually good feedback that I am taking under advisement. It was still a bit much for me emotionally, though.

I finally talked to a friend of mine on gaychristian.net about it, and he sent me the following:

All the expectations people have or want to push your way reminds me of a little plaque one of our editors had on his wall behind his desk. It had a simple statement and scrawled all over the rest of the space of the 5 X 7 page were edits and rewrites in various hands. The caption was attributed to Mark Twain: "Few things are more human or more powerful than the desire to edit someone else's writing."

Posted by Christine Bakke at 11:33 AM