Here's a photo album of the Good Morning America part of my NYC adventure (click on any picture to see a larger version).

I arrived on Sunday, after a very early morning flight. Because I'd slept through two alarm clocks the day before, and had the local ABC film crew pounding on my door for for 15 minutes, the producer of the Good Morning America segment actually called me twice that Sunday morning, the second time to say "Your car is going to be there in 15 minutes. Are you ready?" (upon questioning, she said that yes, she was going back to bed). 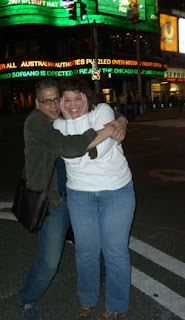 This is with my friend Eduardo, who helped me figure out what to wear the next day. My wonderful friend Jed took this picture. We were heading back from a lovely Italian dinner (where apparently the words "early TV call tomorrow" got us a seat in the middle of the restaurant). I think that this was the first time it hit me, really, that I would be in that studio in the morning; the one behind me with all the lights and screens. 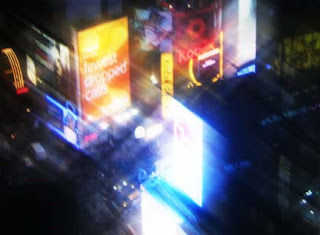 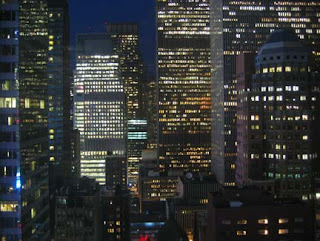 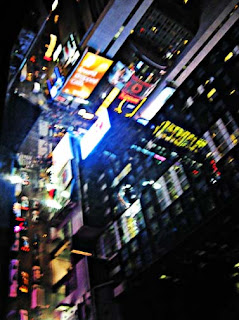 I'm such a tourist, and don't think I've ever stayed in a hotel that had so many floors. I was on the 33rd floor and I couldn't stop looking out the window. Yup, I'm just a small town girl from Denver, and easily impressed.

Here is Jed's story of the next morning (because I was too preoccupied and out of it to notice anything):

4:00am. Jumped out of bed. Let the dogs out, hit the shower. Then raced to the car. Miraculously hit very little traffic.

Arrived 6:00 am in New York. Parked the car. On my way to the Millenium, miracle upon miracle (and you have to know Christine to understand this one), she actually called me.

I raced up the elevator and landed in front of Christine's room. Soon she opened the door wrapped in a towel. Hugs and kisses. 20 minutes later, Christine was half the vision we saw two hours later. A few more phone calls (yes Miss Producer, No I'm not asleep this time, I'm awake and ready...), another hug, and holding hands, almost like a sweet straight couple, we headed to the elevator bank, and met the GMA intern who escorted us across the street and into the stage entrance door.

Filming was already in session. We sneaked past the absurdly squeaking stage door, and tiptoed behind the sets towards the green room. 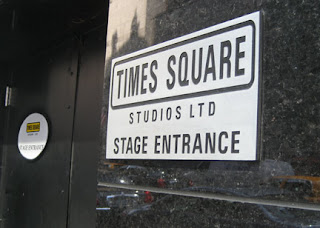 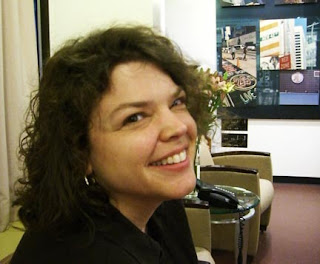 A few minutes went by and our intern led us to the make-up room. Christine had her own personal hair stylist and her own make-up person. So very ChiChi.* 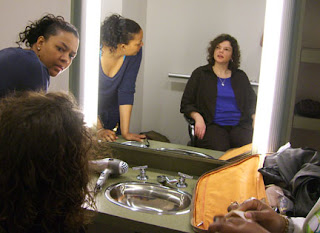 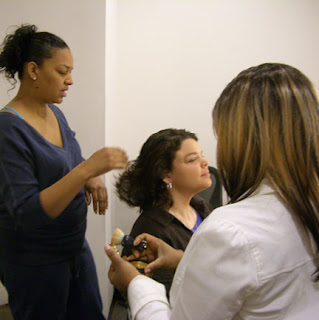 Soon Christine and I were whisked back to the Green room, the room where you wait forever. But this time not for long.

Someone came out, made introductions and talked to Christine. She asked a few questions, and then, "Tell me about your therapy. What did you do?” Christine ran down the list, including the deliverance (demon exorcism).

Next we saw the producer, dressed in a bright red suit (her daughter said to her that morning she looked like Satan), who introduced herself to Christine. A quick two second run through of what to expect followed. Then, “do you want to do a quick interview on XM radio? It'll be a great run through for you, they'll ask pretty much the same questions that Diane will”...

Christine was barely out of the room, when the make-up lady of another guest wanted to know: “Does she channel people?” “What?” I was totally rattled. “Your friend, does she channel people? What was that about the exorcism?” “Oh, no,” I explained hastily, “Christine is no Sylvia Brown. No, no. She is ex-ex-gay.” Yadi dah. I explained it all. "Oh, oh!" They claimed to understand, yet they all looked so confused.

Red Satan lady (who was actually very un-Satan-like) walked back into the room. The phone rang. It was for her. Someone could be heard over the phone. “Where's Christine? The segments have been switched. She can not be late. This is a LIVE SHOW.” We all heard that one. Satan lady replied, "she'll be there. Stop worrying." She turned around, smiled a warm smile. "Oh, another day at the office." 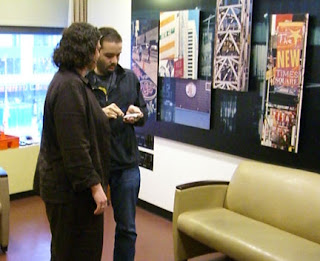 Seconds later, Christine arrived. She beamed at everyone. One guest wanted to know more about the exorcism. The tech guy began to adjust the microphone, taping it to the inside of Christine's lapel.

“Is Christine ready? We're ready to roll.” Satan is back. We went back through the squeaky door, and tiptoed once again behind the set. Christine settled into her seat while around her was chaos. Camera men chatting quietly, a producer or other running around frantically. I was off to the side.

Suddenly there was a little rush and mad whispers of ”Diane” floated through the air. And there she was, tall, graceful and entirely professional. She walked up the stage and sat across from Christine, leaned forward, whispered an introduction. Then she turned her attention to the questions she would be asking Christine.

Things were getting noisier. Christine sat calm as a rock and I couldn’t see her face. Someone stood next to one of the cameras. Hands lifted high, she yelled five, four, three, two,... 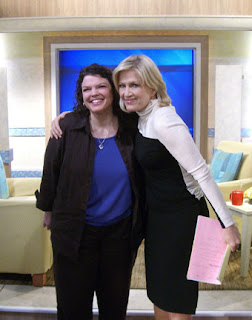 Then we were back in the green room. Lots of thumbs up and gentle applause. Quite a few staff members had read the article, and they all seemed to manage to squeeze in a thanks to Christine.

Minutes later we were back outside. A one-second goodbye, and the big iron stage door slammed shut.

Christine dragged me to the front of the studio where there was a crowd eagerly awaiting the anchors to come outside for another segment. Christine was just too much of a tourist not to want to see what goes on. We snuck up behind them, and before you know it, some people in the audience had recognized her. They turned around and started speaking to Christine. Quite a few minutes later, we finally broke away. We crossed the street and turned around for a final goodbye. It was 9:00am, and with the show over, the crowd started to disperse. 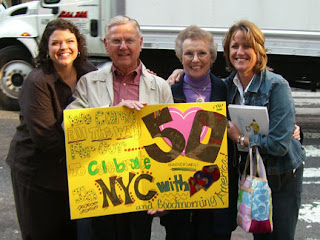 We saw a couple carrying a sign saying "Celebrating our 50th Anniversary." Christine squealed: "That's so awesome. I'd love to get a picture of them." We got their attention. They immediately recognized Christine and congratulated her. Very moving they said. I snapped the shot of the couple, Christine and the woman who I assumed is their daughter. A warm wave goodbye and we were finally off back to the hotel. All twenty steps of the way. It was a turbulent morning, but one of the best to be had. 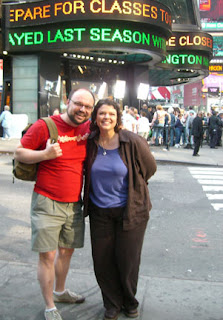 *Other meanings of chichi in other languages:
chichi, a French word meaning false curly hair or fig. humbug
Chichi, an English word meaning fussily affected or ostentatiously stylish, used to describe clothes, interior décor, etc
Chichi, a term used by the British in India and ethnic Indians to refer to people suspected of being mixed race
Chi-Chi, Jamaican slang for an undesirable person, frequently a homosexual
Chichi (pl. chichis), Mexican Spanish slang for "tit" or "breast"
Chi-Chi, Spanish (Castilian) slang for "cunt." It is possible the term is not used in this context in South America.
Chichi, a prison snack consisting of cheese-flavored junk food, noodles, and meat cooked with hot water in a plastic bag
Chi Chi, a slang term used by Indian toddlers to refer to feces

I think if I have to be anything, I'd like to be cheese-flavored junk food, noodles, and meat cooked with hot water in a plastic bag, and not the feces. Just in case you were curious.

Posted by Christine Bakke at 8:09 PM