A few folks have asked about our Chalk Talk at the Beyond Ex-Gay Mid-South Regional Gathering that we had in Memphis last weekend. Thanks to Dan Gonzales we have a video of the Chalk Talk wall. I'll also post still photos and quotes from the wall in a few days. But in the meantime, here's the video. My comments are below (I'd recommend watching the video before reading my comments that relate to it).

I wrote a number of things on the wall during this exercise. It was a really interactive time, probably because we had a much smaller group and smaller space. We really took time to take in what each other was writing/drawing, and we responded to what everyone else was writing, and I noted more connecting of ideas and thoughts. Like I said in a previous post, this weekend was something that I really needed, in part because I wasn't able to experience much of our Irvine conference because of my organizational role. I was able to feel like I could take part in this, and I did. So many things touched me deeply, that I can't even isolate one or two things that were written, but I'll try.

I've still been struggling mightily with the emotional dependency/enmeshment idea and trying to figure out relationships. Ironically, because of how this weekend has rocked my emotional boat, I've had to reach out to my friends a lot this week, and I've seen that they're there for me, and I see that I've been better able to accept their help and friendship without being as afraid of needing or being too dependent. So I think I have made progress there and I am so glad for the friends I have, and especially for a few who have hung in there while I've kept my distance out of my own fear. 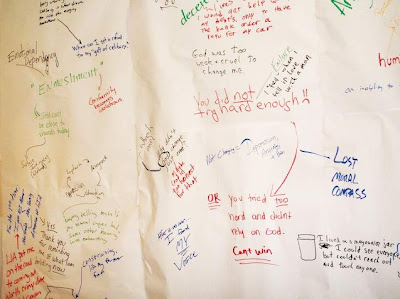 (Thanks for the photo goes to Bruce Garrett)

I had a huge emotional reaction to the idea of failure and "you didn't try hard enough" and I wrote the response "or you tried too hard." Since the Glamour article I have had both of those sentiments directed at me way too many times to count. (I know, sometimes I think I'm too sensitive a soul to be doing this work) But that has hurt me a great deal. I just can't win. And while I know this isn't about convincing the unconvinced, it still hurts to always feel the failure, especially with people I used to be close to.

Which leads me to the locked church (seen in video), and the idea of those whose lives I used to be such a part of, who welcomed me into their homes with open arms, as long as I was Christian and ex-gay. Actually, two of "My House of Cards" playing cards related to this so I thought I would post them here. They're about finding a church with welcoming and open arms, and sinking into those arms that just exuded feelings of unconditional love, which turned out to be conditional, even though I believe they did love me. Still, it hurts to have so much loss when you come out again. (click to enlarge the cards)

Posted by Christine Bakke at 5:27 PM