I got my first e-mail today from someone who read the article in Glamour, and it was very encouraging. I wish I could send her something; some kind of prize. A picture of the cats, Max and Sophie, perhaps? OK, maybe not so much a prize to anyone else but me. It's a little surreal to know that tons of people you don't know are going to read about your life (and some parts that are really private, er...were). Ahem.

It was a very deliberate decision I made to have my story out there. I knew it had the potential to be inflammatory, unflattering and/or incorrect. I know that's happened to a lot of folks who have talked to media. I was worried about my family. It was one thing for me to decide I would come out nationally, but my family didn't have a choice in the matter. I was surprised they actually agreed to talk to Glamour. My sister, especially. I'm glad they decided to participate.

Part of my decision to be interviewed and be out very publically was that I was so pleased that a national magazine was taking an interest in a woman's story. Historically there have not been other women talking about their ex-gay experiences. Jennifer had her story featured in Fish Can't Fly, but I think that was one of the first lesbian former ex-gay stories I've seen. Now I see more women starting to speak out and I'm thrilled about that. I think our journeys often are a bit different from the mens' in ways that have not yet been explored, and I'm interested in that. I'm looking forward to there being discussion on this in the future.

In all (and from other feedback by former ex-gays, including those who have had a lot of dealings with the media) this is probably one of the most accurate and even-handed articles out there (well, from an ex-ex-gay perspective anyway). Stephen Fried did a fantastic job, and he took a lot of care to be as noninflammatory as possible with this topic, which I greatly appreciate. 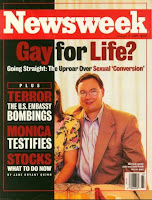 Here's the crazy coincidental part. Stephen wrote a major investigative story called "Cradle to Grave" for Philadelphia magazine (you can find out more about the story here on Stephen's site) that was responsible for re-opening a murder case.

Subsequently, Newsweek ran a follow-up story after the murderer confessed. That story was published in the exact same issue in 1998 that the Paulk's cover story appeared. So Stephen was well acquainted with that particular issue of Newseek, and when I started talking about the Paulk story, and their book, he did a double take. "Wait, you mean that guy that was on the cover of Newsweek in 98?" Yup. That one.

Anyway, I know many people have asked me how I ended up connected with the magazine. Stephen posted a request on an ex-ex-gay yahoo group, requesting women who were ex-ex-gay to consider speaking with him. I sent an e-mail, thinking he was looking for a quote or anecdote. In speaking with him, it soon became clear that it was going to be focused mainly on me. Yikes. This was only one day after telling my story for the first time at the women's group at the GLBT center in Denver. Only one week after I'd started this blog. It was a huge step for me.

So far I don't regret it, and I'm hoping that will continue to be the case.

(Oh, and in other news, the interview on OutQ went well this morning, although I don't remember much of it since it was 5:30 am my time).
Posted by Christine Bakke at 7:32 PM