Have you heard how gays have shortened lifespans? Or that gays suffer from something called "Gay Bowel Disease?" That homosexuals perpetrate half of all child molestations?

All of these lies (and there are many more where these came from) can be traced directly to one Paul Cameron. He has manufactured lies by writing his own studies that usually link to actual scientific studies, but distorting the findings of the scientists. It was actually for this reason that he was expelled from the American Psychological Association in 1983 and the Nebraska Psychological Association in 1984.

Not that any of this slowed him down. He continued to go on to write more scientific-sounding papers and studies, linking to his own earlier works. Other people linked to his bogus studies and then the religious right picked up those studies and cited them. It's an endless cycle that's just kept on going. Those who hate gays (and even those who wouldn't claim to hate gays at all) don't really care to check their facts and find out the sources of the source. The scientific community has pretty much ignored him since he's mostly been self-published or published in obscure journals.

I'm going to interrupt this news brief to tell you a little story.

There was a girl who was raised in a fundamentalist, Christian home. She loved to read and would devour anything written. Her parents received copies of Dr. Dobson's monthly newsletter and the American Family Associations newsletter. When she was fifteen she read "Special Report: AIDS" which blamed gay men for AIDs (and said they were intentially spreading it) and called for tattooing AIDS patients in the face. While she'd read about homosexuals for some time, when she was sixteen, it was there that she read that there was a Gay Agenda and it involved men molesting boys at every opportunity! It was there she fully formed in her head the notion of what it meant to be "homosexual." Being homosexual meant doing dirty things and teachers having sex with boys.

After she graduated from high school, in her home state of California, Representative Dannemeyer published "Shadow in the Land: Homosexuality in America." He called gay people the "ultimate enemy." Her parents received material from the Traditional Values Coalition that stated gay people should not be allowed to serve in the Military because other soldiers would get AIDs from the poor hygiene of the sick and dying AIDs-infested soldiers.

By the age of 21, she would spend nights alone in her room, drinking herself into oblivion in order to deal with the reality that she, too, was one of those homosexuals. The self-hatred ran deep and seemed to know no bounds. She would wake up, hungover, with "die, lesbo bitch, die" written on her skin in permanent marker. It seemed an impossible task to sort out her orientation and conceive of any kind of a life outside of disease, misery, and hatred. She gave herself non-permanent tattoos to reinforce the hatred, almost as if she was preparing for receiving an indelible state-ordered one in the future.

That girl was me.

And Paul Cameron was behind or working with all of those hateful organizations and "research" that came into our house on a regular basis.

As a community, gays still can't live down his old and debunked statistics. As recently as last year, Rob Parsley (a Christian televangelist) quoted some of Cameron's anti-gay statistics. They included "only 1 percent of the homosexual population in America will dies of old age, the average life expectancy for a homosexual in the United States is 43 years of age and although homosexuals represent only 2 percent of the population, they're carrying 60 percent of the known cases of syphilis." These statistics are directly from Cameron's so-called "research" and they were discredited years ago.

We have the chance now to stop another set of bogus statistics from having a life for the next 20 years or more. 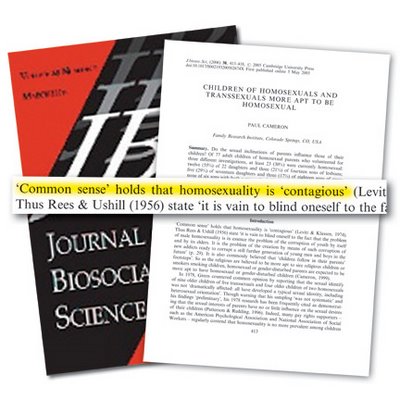 Recently, and how this happened no one can still understand, an actual legitimate journal, the Journal of Biosocial Science, published a paper of his. This is a Cambridge University Press Journal. This is what Paul Cameron has been waiting for for a long time.

The paper is called "Children of Homosexuals and Transsexuals More Apt to be Homosexual." The first words are "'Common sense' holds that homosexuality is 'contagious'" and goes downhill from there.

Where does he get his data from? He says he's getting it from three other "books." OK, so what are these books? Studies? Research books?

Nope, they're just books. Non-research books. Books you can buy on Amazon.com. Books that the authors never intended to have used to bolster anti-gay "research." Books that were not research to begin with, but books intended to approach a broad range of issues using the stories of kids with Gay parents.

One of these books is Abigail Garner's Families like Mine: Children of Gay Parents Tell It Like It Is. Abigail writes that when she found out about the paper, "I was shocked. I had interviewed over 50 adult kids for my book. Cameron had broken down my sample by gender and sexual orientation of the the parent, and the gender and sexual orientation of the offspring. He did the same for two other books, tallied up who dates men and who dates women and concluded that this sample is reflective of the broader population of people with gay parents."

She later clarifies, "In fact, I had made a point of having a roughly even number of straight kids and second generation kids so that both views would be evenly represented in the book. In other words, because of the goals of my book, I deliberately aimed to have 50% of the kids interviewed to be queer. Not because it is statistically reflective of the population, but to give it balance of perspective."

The press release about this article has gone out on the ChristianNewswire--It goes out to all the major Christian organizations.

Jim Burroway at Box Turtle Bulletin has done an excellent job of analyzing the article in question. Abigail Garner has been in contact with the both the Journal of BS (er, Biosocial Science) and other organizations to try to get this thing nipped in the bud. She's had no response from them. Jim Burroway has also contacted the JBS with no success.

Unless we can stop it, I see no reason why this won't be one more tool in the religious right's aresenal against gay parents (and this affects kids of gay parents who don't have the right to have both parents be legal guardians, gays who want to adopt, etc). There's a lot at stake here.

I don't want any other kid to hate themselves or live in as much fear and shame as I did. It's taken me years to sort myself and my orientation out. I wish I could have done that in an atmosphere of love, support, and truth--not bigotry based on lies.

That's what's really contagious. Not homosexuality, but the bigotry of Paul Cameron.
Posted by Christine Bakke at 3:44 PM