Name it and blame it 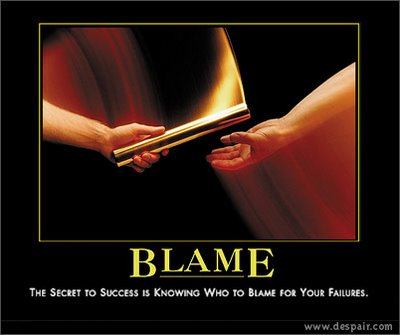 Over the years I've been able to put a lot of my past to rest; to change negative patterns and behaviors. But it's not always easy to change ingrained thinking patterns, is it? And they sneak up on us sometimes.

I have a lot of thoughts and beliefs that feel like they are woven into the very fabric of my being, no matter how irrational they may seem to others (or even to myself at times). One of the biggest things I battle against is the notion that hard times happen because of something I've done wrong (good times I'm not so much concerned about--funny that).

I grew up learning that bad things could be blamed on either Satan or God. Satan, because you had done something bad and God had turned you over to him. Or because you had done something good/righteous and so Satan was suddenly taking notice of you and harrassing you. God could also cause calamity as a test of your faith and righteousness. But he could also cause bad things to happen as a means of correction for a misdeed, or as a way to communicate something important.

Good things could be attributed to God blessing you, or they could also be a result of going further away from God. Huh? Oh yes, because if you are further away from God, Satan might reward you for being his pawn, or at least not actively torment you, because you're weren't causing him any concern.

So I guess there's a 50% chance of blaming the right entity. Not bad odds. Although I still am uncertain as to how we should know who is to blame. Flip a coin?

Now, to be fair, every great once in a while I'd hear "the rain falls on the just and the unjust." Meaning, basically, "shit happens." There's no reason. It just is. But that was pretty rare.

I grew up with my parents asking me if I had unconfessed sin which, when coupled with taking communion, was causing my frequent and prolonged illnesses (actually, it was unconfessed food allergies, among other things).

When it would rain on a day that was set aside for, say, an abortion protest, then clearly it was Satan trying to attack the saints.

My parents also tell a story about how they couldn't sell their house because they were (unbeknownst to them) tithing improperly. When they realized the error and corrected the situation the house sold. God was withholding blessing to alert them to their error.

I have a friend who was diagnosed with MS a week before her wedding. A much-revered Christian friend of theirs actually had the nerve to tell her she thought it was a message from God that she should not marry her future husband (this husband, by the way, has stood by her through amazing physical deterioration for over 10 years now).

I remember being so ill at times (this only a few years ago) and thinking that if I continually prayed and sang praise and worship music (known as "offering the sacrifice of praise" to God), that I would heal faster. God would see my faith and be moved to heal. It would break the power that Satan had over me.

It used to confound me when I'd see nonbelievers with lots more money and outward success than I saw in our family. My parents were incredibly faithful with their money and giving. They supported numerous missionaries and tithed 10 percent religously, no matter what our financial situation was (sometimes quite dire; I've heard stories of us living on $400 a month and I know they almost lost the house on at least one occasion).

I'd ask my parents about it (you know, the neighbors who were unmarried, living in sin, and seemed to be "blessed" by earthly standards) and the response would be something like, "Well, they are getting their reward on earth--ours is in heaven" or "That's because Satan doesn't like the fact that we are doing the Lord's work, so we have more difficulties."

A guy I used to go to church with is now working with a pro-life/anti-gay/anti-Muslim organization and writes:

There have been spiritual attacks, but that's to be expected with the pot we're stirring. We're messing with systems that have been in place for a long time. Too long. Religious spirits have had dominion over the Church of New England for far too long. The're manifesting in crazy ways all over the place. The occult has deep roots here too. We've had to battle unusual sickness and confusion at every turn.

So after 30-some years of this kind of thinking, when things happen like, oh, I don't know, my purse being stolen, my glasses breaking, not having a cell phone or money or ID, and RTD having the unmitigated gall to launch an inane ad campaign, I naturally begin to think...is it Satan? Is it God? Is it a sign?

I've heard it described as magical thinking. A friend called it superstition. I grew up just thinking it was the way things were.

And now it manifests itself in not reacting to bad things that happen. Being cheerful in spite of negative things, until a few days later I melt down under the pressure of not acknowledging my own feelings and emotions. I go through cycles of denial, guilt, shame, blaming myself, feeling the victim, woe is me, what am I doing wrong, what am I doing right, etc. It's not really a pretty picture.

I think I have this thought that if I don't acknowledge how bad something is, then Satan can't "win." See, I just know I can fool that Satan into picking on someone else if only I just act like nothing bad has happened! Or if I flipped the coin the other way, it goes like this: if I don't acknowledge how bad something is, I show God that I'm not looking to my external circumstances for my happiness (so, did I pass the test, God? Huh? Can you bless me now?)

I find it interesting how I can still hold onto these inconsistent beliefs (I mean, the reasons behind why something bad or good happens--at least in many Christian circles--couldn't be more contradictory), while not necessarily believing in them logically.

Now I'm trying to figure out where to go from here. How do I learn just to roll with the punches? To be calm in the midst of the storm not because of the reward I may get, or to avoid further calamity, but just because it is how I choose to live? How do I acknowledge my emotions (anger at being robbed, sadness at what was lost, frustration, etc) and not feel as if I gave in to a nameless, faceless enemy?

How do I stop trying to appease or please this strange and capricious God? How do I learn that life isn't about trying to outsmart Satan? How do I learn to just live in the moment and experience life as it comes--the good, the bad, the beautiful, the ugly--without trying to find some great meaning or some cosmic entity to blame or praise?
Posted by Christine Bakke at 10:20 PM