So my eyes and the perpetual headache (but not a tumor!) make blogging not so very much fun right now, but I really want write about my trip to California.

Hands down, this was the best time I've had back in California, since I moved away to de-gay in 1998.

The last time I was in the Bay Area, in 2003, nothing felt right to me. I thought that I would go back and have a fantastic time and feel wonderful (like I was "home" again). And I just didn't. Here's something I wrote upon my return in 03:

We went over the hill to Santa Cruz the day before I left, and it just felt different to me this time. Different...weird...different...sad. It was just like...this isn't my life anymore. Yes, I lived here for 5 years, went to college here, came out here, met my best friend (the fencer) here, started my career here, "found Jesus" here. And yet all of that seemed so removed. It was a weird feeling. I felt disconnected from everything. Like it wasn't a part of me anymore. I don't know how to explain it - or why it was important and made me feel so down. Even the ocean seemed sad that day. Everything just seemed gray and blah. And I loved it, sort of, but it wasn't home anymore. And I don't feel like here is really home either.

This time everything felt wonderful and happy to me. The difference? Me, and the fact that I am comfortable in my own skin for the first time in so many years.

On this visit I was at a place I love (the Bay Area), coming from a place I call home (Denver) and I now know who I am. The last time I was there I felt caught between who I had been (as gay and out) and who I'd been recently (as ex-gay) and who I felt like I was becoming (something more ex-ex-gay), and I just really wasn't comfortable in my own skin. Everything in Santa Cruz seemed like loss to me then. And there wasn't anything in Denver I felt like coming home to. I wasn't sure if I identified as gay or straight, Christian or not. I was in limbo land, looking for a place to call home.

(Wow. Reading back on those old journal entries from 2003 makes me realize how far I've come.)

So here's a bit of a travelogue of my trip (feel free to skim - it's long and probably boring to those who don't know me or aren't familiar with the Bay Area):

I flew in Thursday night and drove into San Francisco. I was amazed at how I still know how to get everywhere. I parked at Coit tower and walked down and back up most of Telegraph hill. I didn't see any wild parrots, but I did see tons of flowers and amazing gardens, not to mention the gorgeous view of the bay. I really need to get a camera.

As I was driving through San Francisco, I drove up a street with the most ridiculous incline, even for San Francisco. I really think this has got to be the steepest street in San Francisco. The smell of melting tires and overworked clutches brought back memories as we inched up this street (there was a stop sign at the top of the street, so it was lurch, burn rubber, and go and then slam on the brakes every few feet). It felt like I was in a ride at a theme park. I kept thinking my glasses were about to slide off the back of my head, and I remember feeling thankful I was seat-belted in. If I'd been in a convertible I know I would have lost things out the back of the car. Anyway, I get to the top of the hill and was greeted by a yellow sign that said "Hill." Thanks, San Francisco!

I ate dinner at Fisherman's wharf (I actually found free street parking, if you can believe that)--calamari and clam chowder--and bought french bread from Boudin's. As an aside, this is the best bread ever. I recommend the garlic and asiago cheese volcano bread. Real sourdough bread just cannot be made anywhere else but San Francisco! 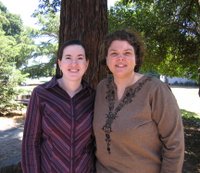 I then drove down to San Mateo to catch my fencing friend, Janine, finishing up her class. This is the first time I've seen her since she got her Master's (the biggest difference that I see, since I don't know anything about fencing, is that she gets to wear black now, instead of white, and that she's super smart since she wrote an entire thesis on "The Decline of Right of Way"). I felt really proud and dorky watching her, reminiscing on when she first started studying fencing, and how long a route this has been for her. Here's a pic of the two of us together over the weekend.

I stayed with the Maestro and Maestra that night (her husband is also a fencing Maestro) and then we went to Santa Cruz the next day. It was an absolutely gorgeous day and while Janine got a massage, I had a leisurely breakfast at a Vegetarian restaurant that Peterson would have loved (they always look at me funny at these places when I ask for food with no soy--I'm allergic). Janine and her massage therapist (also a friend) and I ate lunch by the beach in Capitola. It was such a wonderful time. Janine and I also visited fabric and yarn stores so she could feed her many hobbies (hey, I can't complain, we picked out fabric for her to make me a new purse, and also fabric for a kitty quilt). And really, we could hang out at a pest-control convention or something and have fun... 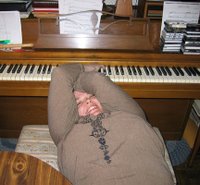 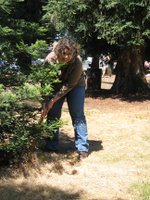 Saturday was the GCN meetup. At this point I was staying with Brad, a wonderful GCNer. We had a picnic and played croquet. I am clearly not an expert at this game, although somehow I did end up coming in third. I may not rock at croquet, but here's a hidden talent of mine. I can play a song on the piano laying upside down on the bench with my arms crossed over each other. The best part is that I learned this skill at the age of possibly 9 or 10, from watching the Lawrence Welk show! It was my favorite "show and tell" event as a kid, and I guess still is now. I suppose it will always work to break the ice.

Here's one more pic of my GCN friend Sherri and I pretending to "fence" for Janine's amusement. I don't think she was amused. :) 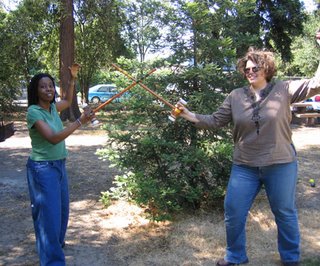 Sunday was Mother's Day, so Janine and I had an un-Mother's Day celebration. We hung out in sunny Los Gatos all day, going into shops, buying beads and other girly things, eating at Pizza My Heart (my favorite Pizza place from Santa Cruz) and just generally having a good time. We had some good talks too, especially when I was suffering stabs of guilt about the situation with my own Mom. Janine was very supportive (she and her brother have not had any contact with their parents in years), but also reminded me that it's easy to only remember the good things, especially as one gets further away from having any contact. I was thinking of how I wished I could take my mom out for Mother's day, and spend time with her like so many other mothers and daughters were doing all around us. But there is too much water under the bridge at this point. Too much hurt, coupled with her complete unwillingness to address any of the issues honestly. So while I looked around and wished that I could have a happy Mother's day with my mom, the reality I'm sure would have been far different, and it would have left me more wounded in the end. I think it's good for me to keep that perspective. 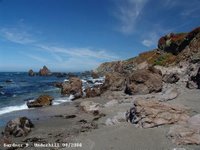 Monday morning I drove up to Novato (north of San Francisco) and hung out with my friend Sheila. We haven't seen each other since 1997 (we think). The weird thing is that we pretty much looked the same, except for my longer hair and purse-toting ways. We drove out to Bodega Bay and spent the day there. I got more seafood (crab is in-season!) at Lucas Wharf. At the end of the day, I did my ceremony with the box. I'll write more about that in a separate post, perhaps. I think it was really healing and gave me a bit of closure. I still keep seeing the box bobbing in the water, going in and out of the foam, surrounded by dense fog. It was an important time.

I stayed that night in Richmond and hung out in Bezerkely (Berkeley) and San Francisco the next day. It turns out I'm a great travel companion. I really like traveling by myself and not really having any plans. I drove around the east side of the City and then went over to the west side to spend some last moments at the beach before I had to go back to the airport.

I'm leaving in a week to go to Kentucky and Tennessee for my 35th birthday bash, so we'll see if that can top this. Maybe I'll even get a camera before I go (an early birthday present to myself?)
Posted by Christine Bakke at 12:31 PM