Assault on gay teen in Colorado 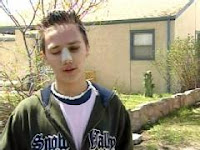 Last Thursday, in Pueblo, Colorado (an hour south of Colorado Springs), a 15-year-old openly gay student, Anthony Hergesheimer, was attacked by six classmates while walking home from school. He was beaten and some bones were broken in his face. They called him a fag, hitting him with a full can of lysol (I know, odd — a can of lysol being used now as a weapon).

Today he underwent facial and nose surgery to repair the damage, so please keep him in your thoughts and prayers for a very fast recovery.

What I'm more concerned about, though, is his recovery emotionally, although he is confident that most of his other classmates will be accepting. I think it's got to have some impact emotionally (hey, it did to me and I'm two hours away, safe in my house, and don't have to worry much about how cruel some kids can be), and I hope that his friends and the gay community in Pueblo will shower him with love and support.

It's sad to me that this stuff happens. These kids don't get this from nowhere. They get it from their family, from society, from people who think that homosexuality is on the same level as being a rapist or a murderer.

But Anthony's mom is different. She said, "I'm very upset. Yeah, my son is gay. But that shouldn't matter. He should be proud of who he is."

With that kind of love and support, perhaps he really can fly through this and be OK.

Good on ya, Anthony. Here's to a speedy recovery and a wonderful life full of people who love you.
Posted by Christine Bakke at 6:04 PM