I do in fact know the way to San Jose 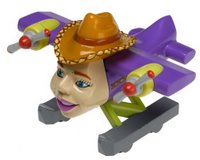 And I'm leaving on a jet plane in a few hours.

I thought I'd get a few good blog posts up before I left but, shockingly, I left everything to the last minute, and didn't check when my flight actually leaves until last night (turns out, like every time, it's much earlier than I thought).

I know that "leaving it for the last minute" thing comes as a great shock to those who know me well. Although, if you're a client of mine, I'm not talking about your work, of course. That always gets done on time, every time, and I'd never dream of leaving it until the last minute. (Actually, this is true...I don't know why but if it's for a client, I'm all over it...maybe I should just pretend that all my personal business is for pay?)

Anyway, back to my trip. I'm heading out to California today for a well-deserved break and time with good friends. I'll be staying with my friend Janine, one of the only classically-trained Italian female fencing Maestros in the U.S. I'll hit the tail end of one of her classes tonight, and we'll spend the next three days hanging out, eating In-N-Out burger, and generally just doing a whole lot of nothing. We do plan to make a trip to Santa Cruz tomorrow, to check out the beach and maybe visit some old haunts (we were roommates for five years there).

I'll also be spending time with Brad from GCN (he's putting me up for three of the nights I'm in San Jose). We'll also have a mini-GCN meet with Bay Area folks on Saturday and I'm looking forward to that. If you're in the San Jose/Bay Area and would like to meet up with us (and you're not an ax-murderer or part of the Phelps' clan), shoot me an e-mail (it's on my profile).

On Monday I'm going to visit my friend Sheila. Sheil and I met in the fall of 1991. We had a humanities class together and also ended up riding the same bus with a crazy assortment of characters. We became pretty quick friends after we finally got up the nerve to talk to each other (about homework or something benign). We did a lot of hanging out and she witnessed a lot of changes in my life over the years. When we first met, I had just come out of the Bible college and was still a very vocal Christian (although suffering privately with my own doubts and a drinking problem). I just came across one of the papers I wrote for my humanities class, and it's really embarrassing. I think I was trying to convert my professor, although I was so unarmed for any kind of battle of wits on the issues.

Sheila came with me when I checked out the University of California at Santa Cruz (which ended up in a very funny incident in San Francisco when my old Nissan Sentra broke down on 19th Avenue and Sheila freaked out because she had to get home to wash her hair). I'm sorry, Sheila, I'll let it go one of these days. I came out to her over the phone (we hardly saw each other once I was in Santa Cruz - I'm not sure why), and she was always supportive of me. She was one of the many friends that I completely abandoned when I moved to Denver to be ex-gay.

We got in touch again just a few weeks ago, and I'm really looking forward to seeing her.

Tuesday I might spend up in Sonoma County area, where I was born and partially raised. I am toying with the idea of going out to Bodega Bay and doing something with the box of stuff that I have been putting together. I'm not sure if I'm going to end up doing that or not. We'll see. I just have really fond memories of being at the beach in Bodega Bay with my family through the years (my mom probably introduced me to that beach as an infant).

So, that's my story. If I owe you an e-mail or a phone call, it probably won't happen until next week. Maybe Max and Sophie will blog in my absence...that would be interesting (and perhaps instructive) to hear their side of the story for a change.

Happy Mother's day to all the mothers that read my blog, especially my sister. You're a great mother, sweetie. I love you.
Posted by Christine Bakke at 9:52 AM