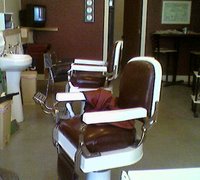 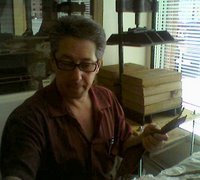 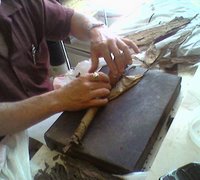 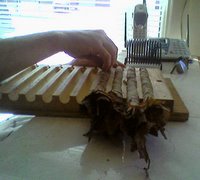 Yesterday after finishing a fantastic lunch near Coors field (Denver) my friend and I passed by an old-time barber shop. Intrigued, I stopped and poked my head in. The barber was sitting at a desk hand-rolling cigars. I was right when I assumed that no one did that in Denver anymore, and certainly not your average barber.

So we stopped and talked to him, and found out all about the art of rolling cigars; how they're pressed and made. Clay Carlton explained to us that he'd started a nonprofit organization called "Cigars for the Troops" that sends cigars for free to troops overseas. As he explained to a local newspaper, "Not everyone supports the war," he said. "But everyone supports the troops. This is something that's a direct perk for them. It's something that can be sent to a battle zone and enjoyed." You can read more about Clay Carlton here on his site.

I don't know about your neck of the woods, but around here the yellow "support the troops" magnets are seen on cars everywhere. But what do people do to support them in a literal sense? [An aside, I tried to keep one of those magnets on the back of my truck, next to my "war is not the answer" bumper sticker, but it got ripped off. I guess people don't like the idea of an peace-monger supporting the people who are there.] The only thing I've done so far to "support the troops" is buy a few phone cards for donation at my local post office.

I believe in self-determination, and the idea that I'm not the judge of what someone does with their lives, lungs, etc...and I know lots of guys like a good cigar now and again (and some girls too!)--so I made a small donation to this cause.

If you're in the Denver area, first stop at Buenos Aires Pizzeria (yum! and right near Coor's field - on 22nd between Market and Larimer) and then hop over next door and get a haircut or see how cigars are made (I think Clay's only there from Wednesday to Saturday, though). If you'd care to, drop a little something into the hat for the troops as well.
Posted by Christine Bakke at 5:36 PM