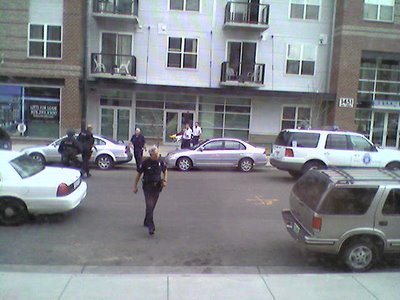 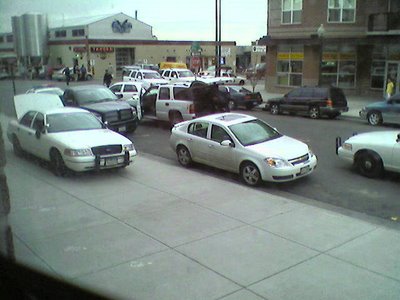 Somebody is shooting at random from a building near where I'm working. At last count there were 14 cop cars and the entire SWAT team outside (this is the view outside the window that is directly at my back). I guess if you want to commit a crime in another part of Denver, this would be the time.

Actually, we're just hoping it's not someone who's gone postal from the advertising agency...

[UPDATE: so now they're saying it's a suicidal guy with a gun in an apartment (just around our corner)...they're going in to attempt to negotiate with him...if you're the praying kind, please pray for this person.]

[UPDATE #2 4:31 pm: Apparently the suicidal guy wasn't even in the building. Turns out he was in Boulder. They broke down his door and found...no one...so the SWAT team is packing up and leaving...but there might be a suicidal guy still running around Boulder. Nothing to see here...nothing to see....move right along, please.]
Posted by Christine Bakke at 2:49 PM